The top 10 characteristics found to be associated with a low credit score.

Credit Repair Australia CEO Richard Symes outlines the top 10 characteristics found to be associated with those individuals who have a lower credit score.

Credit Repair Australia recently conducted an analysis of over 1,500 consumer credit files. The results indicate that certain characteristics are associated with those with a lower credit score due to black marks on their credit report.

Based on our analysis, we saw a greater number of males with a low credit score than females. The figure for males was 69.5%, whereas for females it was 30.5%. 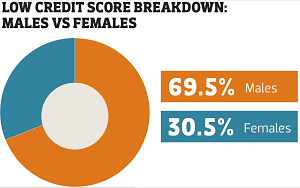 Our analysis also exposed Victoria (25.4%), NSW (24.3%) and Queensland (22.3%) as the states that have the highest percentage of black marks on their credit reports. (The results reflect the highly populated eastern seaboard.) These black marks have the ability to lower an individual’s credit score.

In fourth place was WA (18.5%). The state or territory with the fewest black marks on its credit reports was the ACT (0.5%). 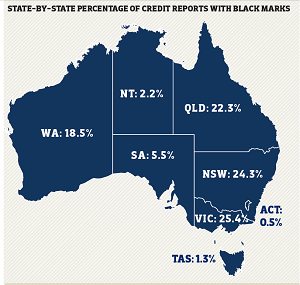 In addition, the majority of people with a low credit score are either working full-time or are selfemployed. This is not surprising as you need a steady income to be approved for finance. Failure to keep up to date on such finance can result in a black mark being placed on an individual’s credit report. 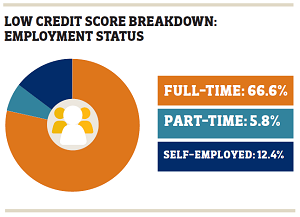 Those aged between 26 and 32 are more likely to have a black mark on their credit report. 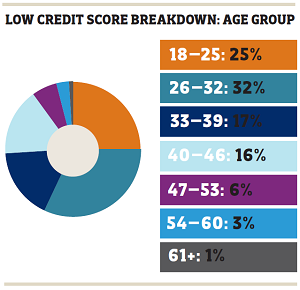 Furthermore, surprisingly, the average income of someone with a black mark on their credit report is $1,247.46 a week. This was the overall average of the sample group.