Gerard Tiffen’s biggest challenge this year hasn’t been ASIC, the banks or investors. “I’ve hit this weird stage in my life,” he explains. After years working with a tight-knit group of staff, several are now taking time off to have children. “It’s a strange period for me, but that’s business, isn’t it?”

In practical terms, this has meant a year of consolidation. With so many staff on maternity leave or working from home, Tiffen says, “you need to make sure you stay on top of that culture”. Through boot camps and or weekly drinks Tiffen has been trying to hold the brokerage together, and it seems to be working: in a year when many brokerage settlements went down, Tiffen & Co’s numbers continued to climb.

Canberra has always been both a blessing and curse to the brokerage. “We’ve only got 380,000 people in Canberra,” Tiffen says. “It’s not like a 4.6 or 5 million market like Melbourne or Sydney.” However, being based in Australia’s capital has meant that Tiffen’s clients are relatively wealthy mum-and-dads, not property investors, meaning they’ve not been hit hard by recent lending restrictions.

As for ASIC and Sedgwick, Tiffen isn’t rushing to judgment. “[It’s] not that I think it’s a storm in a teacup; I think it’s serious stuff. You just don’t know with banks, do you? I genuinely think they value us, and I don’t think they’d chop off their nose to spite their face.” He’s more pessimistic about the ASIC review: “It’s not impartial; I don’t think they’ve spoken to the right people.”

Although other brokerages are responding by going down the fee-for-service route, Tiffen is not convinced. “I’m not changing our business model … I don’t think I could charge people for doing what I do.” Nor does he believe that the brokerage, which is heavily dependent on revenue from commissions, needs to diversify. It’ll be business as usual for the coming year.

Tiffen & Co can sit tight, in part, because of its ingenious approach to controlling costs. With little marketing spend, the brokerage needs to maintain great relationships with referral partners and existing clients, who they invite to special events. “We do a lot of entertaining in-house,” Tiffen explains. “We’ve got a kitchen upstairs and we might get a speaker in who’s a client.” This month Andy Friend, Australian Sevens coach, will be coming to the brokerage, along with the captain of the Sevens, to talk to referrers. “There’s some little gems in Canberra like that,” says Tiffen. “It creates strong relationships with our referrers; they love that kind of stuff.” 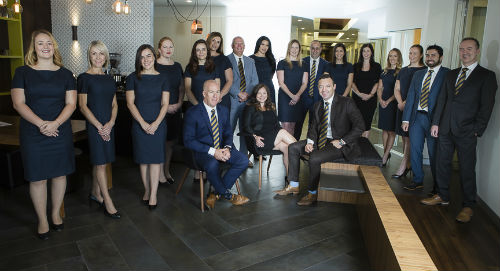