Are you operating in one of the areas where your customers could be getting you into trouble? Read on to find out where Australia’s mortgage delinquency rates have hit worrying levels. You may be surprised.

It’s that time again. Fitch Ratings has published its signature postcode delinquency report, providing a fascinating insight into those areas where the mortgage delinquency rates are well above the national average. Are you operating in a high-risk area?

In terms of overall mortgage values, the country’s delinquency hotspot was Nelson Bay, NSW, which reached a 30-plus day arrears rate of 6.6% in September 2012. This was an improvement on its March 2012 Rate of 7.8%, but wasn’t enough of a drop to take it off the top spot.

“Nelson Bay has been the worst performing postcode in Australia since this report was first published in November 2007. Stagnation in the local housing market has increased the time required for foreclosed properties to sell, leading to an accumulation of arrears in the 90-plus day bucket (5.78% at end-September 2012 versus 4.57% at end-March 2012). Properties backing mortgages in arrears tend to be high-value properties, where the mortgage balance is on average almost three times the average loan balance in Nelson Bay,” said the report

“If these foreclosed properties were to be sold and the 90+ day arrears cured, Nelson Bay arrears would improve significantly.

The top 20 delinquency hotspots by total value were as follows: 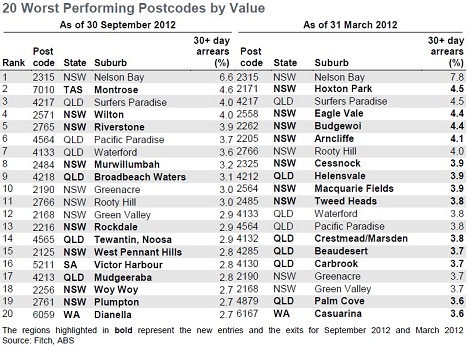 When it came to those areas with the worst delinquency rates by number of mortgages in arrears, Tasmania’s Montrose was the worst performer – with 32 borrowers out of 1,000 in delinquency.

“Montrose is the only postcode in Tasmania among the 20 worst performing postcodes. Montrose was not included in the postcode analysis in previous reports as it did not meet the eligibility requirement of having more than AUD100m worth of mortgages in the Fitch data set,” said the report.

The top 20 delinquency hotspots by number were as follows: 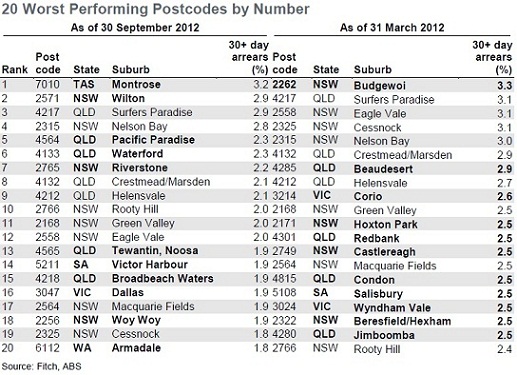 Other findings... Gold Coast in trouble

Other highlights of the report, as highlighted by the Fitch Ratings team, included: