Are Aussie house prices too high?

Are Aussie house prices too high?

What should you be more worried about, interest rates or house prices? 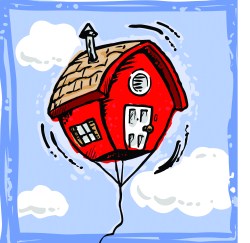 Russell Murphy, general manager of Homeloan HQ says there are more important things to worry about than whether the cash rate goes down, up or stays the same. In particular he thinks Aussie houses are still over-priced.

Doubtless there was plenty of hand wringing in Martin Place & Collins Street after the February RBA meeting when the penny dropped for the Big Four that because cash rates were parked at 4.25% they’d missed the opportunity to cop a 0.25% rate reduction for the inconvenience of passing 0.15% along to customers.

Their discussions would have focussed on lesser evils like what would it cost to absorb rising wholesale funding costs and squeezed margins?  Or what would it look like if the big banks tweaked rates across their gigantic mortgage books?  What about waiting until the March RBA meeting?  What about sacking a few hundred hapless clerks and exporting their jobs to the subcontinent?

Whatever the option, one eye would have been on the potential for stinging criticism from shareholders, customers or ratings agencies.  Maybe there was even lip service to the predictable chiding from the World’s Greatest Treasurer.

But for most Australian households, the rate debate is a storm in a teacup.  Whether the cash rate is 4.25% or anywhere near isn’t going to change their lives.

TIP: IF YOU WANT GUIDANCE ABOUT THE BEST WAYS TO BEAT THE BIG BANK RATE RISES, USE OUR MORTGAGE CHOOSER ON THE YOUR MORTGAGE WEBSITE TO FIND OUT WHERE YOU STAND

More to worry about

A bigger potential worry is that on the tail of unprecedented home loan consolidation amongst the Big Four at the expense of profit the banks will start to reclaim all the margin they’ve “forgone” whilst buying their growth.

If you’re a disaffected big bank customer the choice will be between the devil you know, or another you don’t.

Another potential worry is spiralling electricity bills, car registration, insurance premiums, council rates, health costs and a pile of other household costs over which we collectively appear to have absolutely no control.

But all these are relatively petty compared to bloated underlying Australian property values that we are obliged to hurdle just to borrow for a mortgage we then struggle to afford for the next 30 years.

Thinking back on it, the Great Aussie dream of the 70s was a three bedroom cottage and a Holden.  The model father was met at the front door at the end of his work day by the model mother whose day had been improved by intercession of a Hoover and a Whirlpool.

By the 80’s that contented vision had hardened in favour of education and employment revolutions that promised boosted household earnings which, we were assured, would convert into greater lifestyle spending and increasing leisure time.

Sure that leisure time might have become a fact for some, but for most of us taxpaying punters the reality became greater household earnings that were need to be ploughed into booming home prices.

The result has been artificially inflated values and vast chunks of our national wealth marooned in non-income producing homes. And still it goes on, assisted by haphazard planning, government charges, high building costs and the like.......

According to this Demographia yardstick, Australias major markets are all severely unaffordable despite a couple of years when “affordability improved”  i.e. values fell.

So my point is that whether the average mortgage goes up or down by 1%, or whether the banks take a fatter risk margin, these impositions are a drop in the ocean compared to the enormous sums involved in simply buying and paying for a three bedroom home with a garage for the Holden.

Demographia also notes other long standing limitations on housing affordability in Sydney, Melbourne and Adelaide like varying degrees of restrictions on housing development on the urban fringes.

But a simplistic fix like more land releases on the urban fringes is hardly likely to have any meaningful impact on affordability in those cities.  Our Severely Unaffordable cities compare with places like San Francisco (6.7), London (6.9) & Vancouver (10.6).  If we do nothing about it, next stop could be the eye watering stratosphere of Hong Kong (12.6 times).

Just to put a little more perspective on local housing prices, News.com.au Money reported late last year that the median house price in Sydney was $651K.  In London it was $462K and New York $460K.

The unspoken reality is that the difference in affordability between Australian home prices and those of cities like London and New York is because consumers there have been encouraged to invest in other assets as a result of long standing taxation treatment of homes that levels the playing field.

Sure the price is payment of tax, but the reward has been to avoid the astronomical and unsustainable Australian housing values.  The kicker is the release household income that can be used either to invest in income producing or spend on lifestyle assets.

Isn’t that what we set out to do in the 80’s with up skilling of the taxpaying public?

But I admit it’s not simple.  In the US, for instance they have complex taxation treatment for family homes that include all fashion of exclusions.  For instance there are tax free components of capital gain.  There are concessions for length of residency in a home, or when a taxpayer relocates for medical reasons, or for homeowners serving in the armed services.

There are concessions for “like kind” exchanges & profits from a divorce buyout.  There are exceptions for nonresident immigrant spouses. The is separate treatment for expatriates and alien taxpayers.  And on it goes.

So leveling the playing field is by no means easy but sooner or later I suspect that to take the pressure home and mortgage values that Australia, we will need to debate inclusion of the family home in the taxation mix along with rental property, shares, superannuation & interest on cash deposits.

In the meantime, I guess the obvious topic for discussion around the BBQ will be mortgage rates and while the Big Four clamor to “recover foregone earnings”, I’d recommend consumers to let their fingers do the walking.

Russell Murphys property finance experience spans almost 40 years and a number of economic cycles.  He has held senior roles in prominent Australian and foreign owned institutions and for the past 12 years has been General Manager of a privately owned Mortgage Management business engaged in the Australia wide distribution of commercial and residential loans.