Do you really have to pay $2 every time you want to withdraw money from an ATM that doesn’t belong to your bank? You shouldn’t – here’s why. 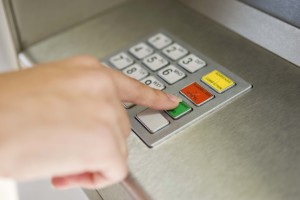 Direct charges at ‘foreign’ ATMs (ATMS that don’t belong to your bank) have been in place since 2009. They were supposed to discourage consumers from using ATMs that didn’t belong to their bank, and as a result the banks and ATM suppliers were supposed to bring their fees down.
But are the reforms working?
An RBA report on bank fees found revenue from ATM fees have declined substantially, but ATMs were still our most popular way to get cash. Meanwhile, most ‘foreign’ ATMs still charge around $2 for a withdrawal.
Even if you only make one ‘foreign’ ATM withdrawal a week, you’ll end up paying over a hundred bucks just for the privilege of accessing your own cash. The best way to avoid these fees is to do business with a bank that has a large ATM network, no ATM and EFTPOS fees or unlimited free transactions.
• BankWest Zero customers have free ATM access to any machine operated by any of the Big Four banks Australia-wide
• NAB customers have access to RediATMs as well as its own ATMs (3,500 machines)

All figures above are approximate

Want to avoid being directly charged for using an ATM? Here’s how you can find out before you leave the house.

1. Find out which ATM network your bank, building society or credit union is part of.
2. If it is affiliated with one of the Big Four bank’s ATM networks, visit that bank’s website. They all have excellent ATM locator tools to help you.
3. If your bank is affiliated with the rediATM network visit www.rediatm.com.au and use its locator.
4. If your current account is with a bank that has access to Big Four or RediATM machines, your chances of having to pay direct ATM charges are significantly increased, so organize your cash before you travel or visit unfamiliar areas.
How many ATMs can you withdraw cash at for free?
The ATM job
Identity theft is a serious problem for many ATM users. Devices attached to the front of ATM machines such as skimmers or cameras that record your PIN and account details can be hard to detect.
To keep your identity safe:
1. Check account statements to make sure they don’t include any transactions you haven’t made and contact your bank immediately if you find any
2. Never write down your credit or debit card PIN or give it to anyone
3. Cover the keypad when entering your PIN
4. Make sure the flashing light at the front of the card slot is visible and nothing has been placed in front of it as this may be a skimming device