Residential property buyers looking for the best place to invest in should consider Victoria, the state that recorded the most improved home-loan affordability during the first quarter of the year.

Victoria’s home-loan affordability index grew by 5.1% to 30.8 points in the 12 months to the March quarter. This was higher than the average growth across all states at 3.4%, according to PRD Nationwide's Q3 2019 Key Market Indicators report.

Also read: Which Victorian suburbs have the cheapest homes?

"This suggests that the decline in first home buyer loans may not specifically be due to local market conditions, but rather, as a result of a larger national phenomenon in response to tighter home mortgage lending criteria, and other political and economic uncertainties," PRD Nationwide said.

Victoria also led the nation in terms of the highest number of dwelling approvals, at 4,691 in June 2019. However, this still represented a 15.1% decline in approvals from last year.

"This suggests there is a vibrant residential construction industry in Victoria, particularly as the number of dwelling approvals declined by 20.6% across Australia in the past 12 months. However, a declining pattern in the past 12 months will allow for current and already planned stock to be absorbed by the market," PRD Nationwide said. 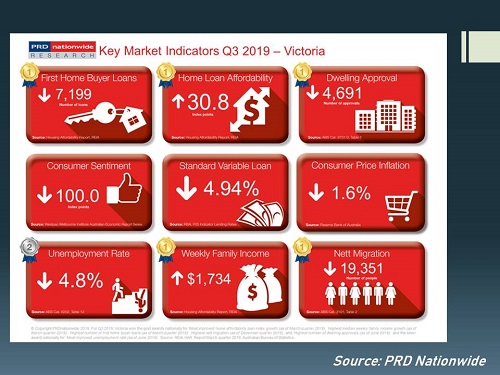