The eighth wonder of the world ƒ?? compounding

The eighth wonder of the world ƒ?? compounding

The past century has probably not seen a sharper mind than Albert Einstein. 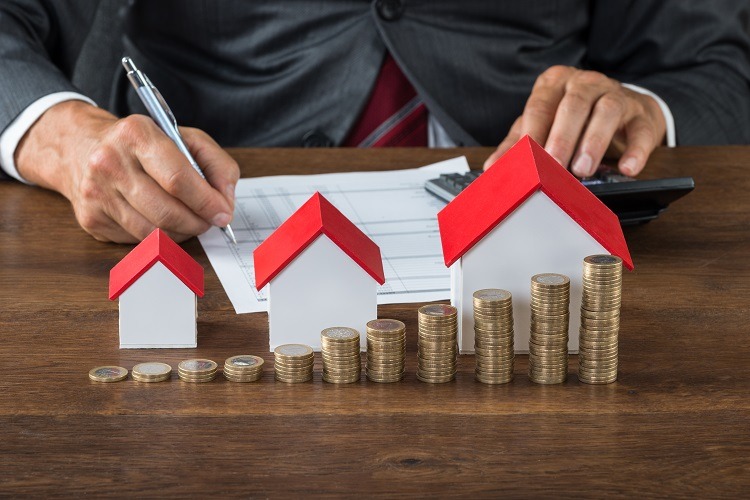 The past century has probably not seen a sharper mind than Albert Einstein.
And, if I know anything, it's that smart men and women are often good role models to follow.
Albert Einstein, for example, is credited to have called compounding as the most powerful force in the universe, in fact the eighth wonder of the world.
And if it's good enough for Albert, well, it's good enough for me!

The power of compounding
Compounding is so powerful because it's the ability for money to grow in value by ever-increasing multiples of itself.
Over time, that number gets larger and larger, which does sound rather exciting, doesn't it?
However, here’s a point that we often miss in the discussion about compound interest.
Despite it possibly being one of the most powerful forces in the universe, it’s clearly not one of the most exciting – at least in the short-term.

Nothing really great happens until after years and years of discipline, and most importantly, patience.
To demonstrate how powerful compound interest is – if you start with one cent and double it every day for 30 days, you’ll end up with $5,368,709.12.
What's the catch?

The difference to simple interest is instead of adding two each time you multiply by two.
Making the most of compound growth
So, with property investment, it is the increasing value of the properties in your portfolio over the long-term that will form the basis of your future wealth.
Let's consider an example:

If you own an investment property that's worth $500,000 and it grows over a cycle by seven per cent annually, the second year it will be worth $535,000.
The next year, however, that seven per cent growth will be calculated on the new value of $535,000 so the property will increase to about $573,000.
Taking this example through a 10-year cycle, using seven per cent annual growth on average, then it will show that one property grew in value by an incredible $438,000!
And the vast majority of growth occurred in the final three years.
Now if you hold that property for a further 5 years you’ll see it grow to almost $1.4 million in value – with a whopping 45% of that growth occurring in the last 5years. 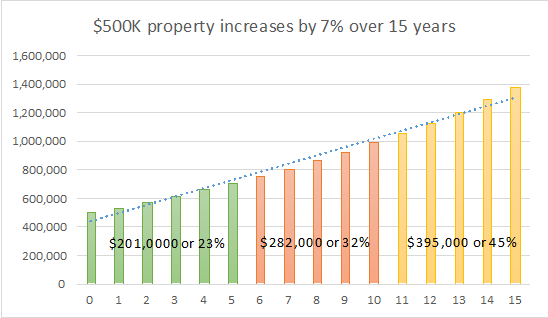 It’s time in the market that counts
My point is that as a property investor, longevity in the market is key. But so is duplication.
If you buy three investment-grade properties worth $500,000 each and hold them for 10 years each, at the end of that period, they could be valued at double their original purchase price if the average annual growth rate was seven per cent.
Your $1.5 million investment could have turned into a $3 million one – with the passage of time being one of the main drivers of that growth.
And if you held them for a further 5 years your investment portfolio could be worth almost 50% more – possibly another $1.5 million.
Fact is that when you look at the financial positon of successful investors when they retire, you’ll find most of their asset base isn’t money they saved, or rent they received or the mortgage they paid off.
The bulk of their wealth is capital growth which arose from the power of compounding.
However, to end up in this situation, they must be patient while it happens ­and have chosen investment grade properties that grew in value at wealth producing rates of return– but sometimes that can be easier said than done.
Hmm…something to think about.